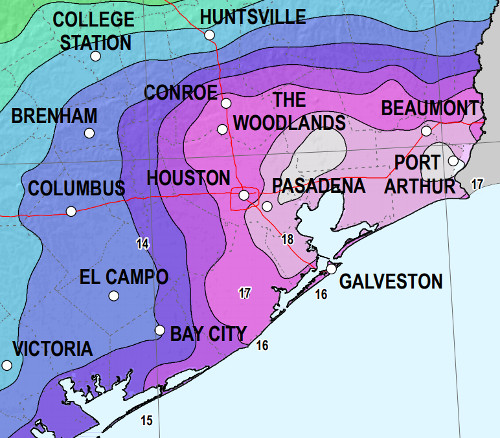 Originally proposed new 100-year rainfall amounts posted shortly before hurricane Harvey. It shows 18″ of water falling across a large swath of the city. Houston only requires 6″ of detention. Where does the other ~12″ of water go? 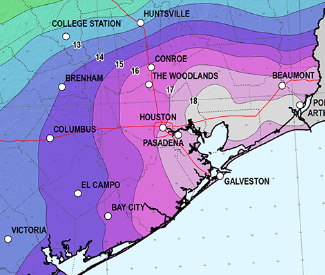 Final NOAA rainfall maps were changed dramatically after Harvey. The area where more than 18″ of rainfall occurs now extends from East Houston to Beaumont.

Dan Crenshaw (R) and Todd Litton (D), two candidates seeking the seat of retiring U.S. Representative Ted Poe in the 2nd Congressional District this November will offer what they, if elected, would do about Houston’s dire flooding situation.

Attorney Bill King, former Chronicle Editorial Board Member and 2015 Houston Mayoral Candidate, will offer an alternative opinion about ReBuild Houston, also on the November ballot, as it relates to drainage and flooding.

As a nonprofit, RAF cannot endorse one candidate over another, however we can advocate for drainage improvements or policies that reduce flooding.

Starting at 8:00 to 8:15 – Audience Questions for Bill King, Todd Litton & Dan Crenshaw.  Only Questions pertaining to flooding will be allowed by the audience.  Please respect this!

Bill King, a lawyer, is a respected civic leader in the Houston area.  He is a former mayor of Kemah, former Houston Chronicle columnist, and has served on many civic boards.  In 2015, he narrowly lost the closest mayoral election in Houston’s history.

Dan Crenshaw is a decorated former Navy Seal with a Masters in Public Administration from Harvard’s Kennedy School of Government and has been published in the National Review.

Todd Litton has served on numerous non-profit boards and committees, with his leadership recognized with the Children’s Defense Fund, Texas Lyceum and others.  He has practiced law and worked in investments.  He holds a law degree from the University of Texas and an MBA from Rice.

RESIDENTS AGAINST FLOODING is the oldest 501(c)(3) non-profit in the city focusing on policy matters to make Houston resilient to flooding.  We have been taking flooding seriously since before 2009 and predicted the current flooding crisis.  We are appealing our federal lawsuit against the city to the U.S. Supreme Court later this month.  The goal is to force the city to focus its spending on flooding infrastructure and not pet projects for campaign donors.  The city is fighting dirty, and we expect they will continue.

** Woodview Elementary is where we held our first meeting after 500 area homes flooded during an unnamed thunderstorm in 2009.  Since then more impervious cover has been added to once permeable ground, more upstream and downstream development has occurred, and whole tracts of land – large and small – have been elevated, transferring water to nearby lower elevation properties.  Woodview is slated to be redeveloped within a few years and RAF thinks it would be a premium site for area detention – either above or below ground.

Although the event is free and open to the public, it still costs to hold meetings like this (school rental, safety officer, media operator, etc.). Contributions are encouraged to help support the nonprofit and a hat will be passed. Further details will be posted at:

as well as on Facebook at Residents Against Flooding aka MCDDC,

RESIDENTS AGAINST FLOODING BOARD

Below are videos of the meeting:

The first few questions were to establish public statements for which we will hold whoever wins accountable. No doubt they are obvious. But consider how often our elected officials and their appointees have been unwilling to admit to the most basic and obvious truths.

Some of the questions listed were loaded; that is, we put enough information in the question to hint that we wanted the candidates to come up with a nuanced answer.  Question 5, for instance, talks about No Adverse Impacts (NAI) as a possible policy. What we didn’t say, but hoped the candidates would recognize, is that a policy of NAI only maintains the status quo; i.e., flooding doesn’t get worse. Anything less, ANYTHING, makes flooding worse. And we’re not even capable of establishing p0licy to stop it from making things worse.

In question 6 we pretty much answered the question, “Should FEMA replace their outdated Flood Insurance Rate Maps (FIRM’s) with these more accurate private maps?” Here’s what we said, “Independent mapping companies have mapped the entire country with better accuracy and resolution than FEMA has available, showing Houston as more exposed to flooding than the FEMA maps indicate. Private companies are already using these maps to better manage their risk by avoiding flood-prone areas.”

Of course we should look at the private sector maps – they’re done; Congress is broken; FEMA is financially broke; and there’s too much development money in local politics that’s resulted in some very bad decisions, including pulling land out of the floodplains for development.  The private sector has already completed what FEMA cannot seem to get started – it’s done and it was done without developer or governmental fingers on the scales.

Question 7 pointed to one of the main causes for flooding. “The City of Houston lobbied Congress to change FEMA rules to allow redevelopment of properties bought by the government due to repeated flooding. If a Professional Engineer says it won’t impact flooding, the city will allow construction in the floodway using fill dirt to elevate properties.”

Building in a floodway absolutely should be forbidden, and it should be done on the federal level, not at the local level. A floodway is guaranteed to flood in a rain event. Anything built in the floodway will obstruct water flow and back up water upstream, causing further flooding.

Current federal (FEMA) rules say that no fill dirt can be added in the 100-year floodplain; i.e., no net fill. Dirt used to elevate structures must be scalloped out from the floodplain itself. Changing this national policy at the local level will cause additional flooding, even if a professional engineer is willing to certify that it won’t.  Further, professional engineers have made some very bad analyses in several areas that we are familiar with; e.g., Pine Crest Golf Course and the Conrad-Sauer detention pond.

We had hoped Question 8 would spur a little research. “The National Flood Insurance Program (“NFIP”) is insolvent. What solutions would you propose?” Congress passed the Biggert-Waters Flood Insurance Reform Act of 2012, which established true actuarial rates for insurance that significantly raised the costs of flood insurance for at-risk properties. These property owners made so much noise that Congress repealed much of the previous Act with the Homeowner Flood Insurance Affordability Act of 2014. Point is, Congress knows that we cannot continue to subsidize risky behavior and we had hoped that our candidates would know that, too, and would have strength in their convictions.

In Question 9, we defined what is vital to our nation’s security and economy to protect: “Houston’s economy is dependent on petrochemical plants along the ship channel, which a hurricane storm surge could seriously damage.” Then in the question, we hinted that there were other solutions rather than just the Ike Dike or Coastal Spline. “What is your opinion on solutions like the Ike Dike or the Coastal Spine (or other) and would you actively support funding?”

Why did we add “other” and why is it so important to us? Because neither of the other approaches will adequately protect the jewel, the ship channel, from a storm surge. The huge storage tanks along the ship channel hold millions of gallons of toxic materials, but they are designed to hold fluids inside, not to protect against storm surge waters. Scientists and engineers say that they will likely collapse, releasing their contents and contaminating the region, creating one of the worse ecological and economic calamities the World has seen. The Rice SSPEED Center has done extensive modeling that shows there is sufficient water in the Bay so that hurricane winds can recreate the storm surge behind the Ike Dike or the Coastal Spine, meaning they wouldn’t be effective for stopping ship channel damage.

The good news is that the SSPEED Center has identified a solution and we think that it’s important for our Congressional candidates to know about that solution since they would need to vote to support it.